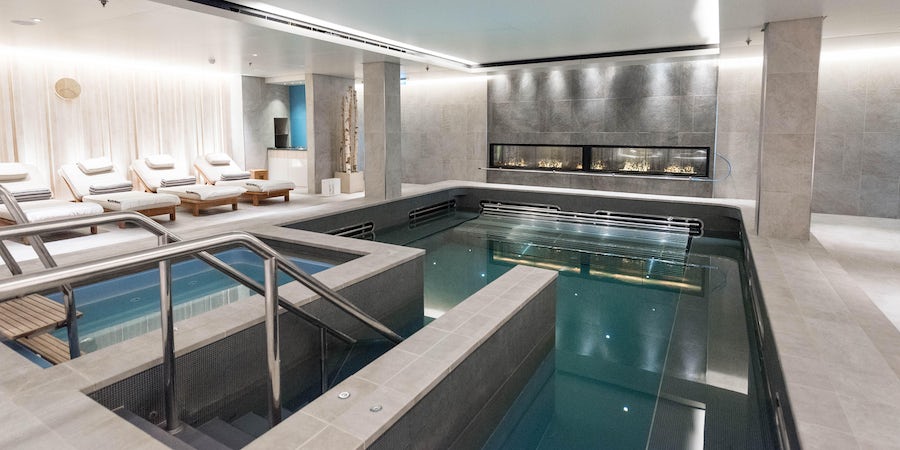 14 Things Not to Do in a Cruise Ship Spa

Unless you're a regular spa-goer, it's easy to find spas confusing or even intimidating. Not only do you have to figure out what all the different treatments are (whatever on earth is ionithermie, for instance), but what are the rules? Are there rules?

Truth be told, there really aren't many written rules when it comes to cruise ship spas and thermal rooms -- don't proposition your spa therapist is probably the most important one -- but there are unwritten and common sense rules that go a long way to ensuring your spa experience is as good as it can be. To help newbie cruise spa-goers and experienced spa enthusiasts alike, we've put together a list of things you should not do before, during or after your spa treatment or time spent in a thermal suite. Follow these simple steps and you'll be on your way to having a great spa experience. Unless you're a regular spa-goer, it's easy to find spas confusing or even intimidating. Not only do you have to figure out what all the different treatments are (whatever on earth is ionithermie, for instance), but what are the rules? Are there rules?

Truth be told, there really aren't many written rules when it comes to cruise ship spas and thermal rooms -- don't proposition your spa therapist is probably the most important one -- but there are unwritten and common sense rules that go a long way to ensuring your spa experience is as good as it can be. To help newbie cruise spa-goers and experienced spa enthusiasts alike, we've put together a list of things you should not do before, during or after your spa treatment or time spent in a thermal suite. Follow these simple steps and you'll be on your way to having a great spa experience.

During a spa treatment:

1. Don't forget to go to the bathroom beforehand.

There's nothing more distracting during a relaxing massage than a full bladder. It's even worse if you're in the middle of a wrap, as you can't just get up and run quickly to the loo. Before any treatment, make a quick pit stop so that you'll be free and clear to enjoy your treatment.

Cruise line spas often add an automatic gratuity to the bottom line of whatever treatment you've gotten. On American cruise lines such as Royal Caribbean and Celebrity, it's usually between 15 to 18 percent; on P&O's Australian ships, it's 5 per cent. This will be noted on the receipt, and there will also be a blank line underneath for you to add a tip, so be careful not to tip twice. An honest spa worker will point out the automatic gratuity so that you don't 'double tip' in the post-haze glow of a massage, but not everyone says something. Always look at the total price on your receipt before signing if you're unsure. If you want to tip extra to bump it up to 20 percent or because you were blown away by the service, go ahead and do so. Just don't feel like you have to.

To have the best possible spa experience, you need to communicate clearly with your massage therapist, aesthetician or body treatment specialist about what you like and don't like (or if you know you have any allergies or medical conditions that could be a problem during a treatment). If you only enjoy a massage with lots of pressure and don't say anything, you'll probably find your therapist never digs in. If you get claustrophobic in tight spaces when left alone, you'll want your aesthetician to stay in the room during a wrap. Spa workers are not psychics; if you don't want your cuticles cut, hate having your head massaged, don't want smelly lotion or anything else, then you'll need to say something.

Hey, it's your money, but know this: If you show up late for your appointment, your treatment will not be extended past the scheduled end time. It will simply be shortened to fit into the amount of time left. You might also upset whoever's been assigned to you as she'll either have to rush to finish everything in a shorter amount of time or figure what to cut out, both of which will probably cause her unnecessary stress. Either way, your treatment will almost assuredly be less than stellar. 5. Don't show up for a massage with a sunburn.

What happens when someone manhandles your skin when it's freshly sunburned? In a word, pain. While you should always try to avoid a sunburn, it's especially important in the days before a scheduled massage. A facial, on the other hand, can be a great treatment after a sunburn.

6. Don't shave before a scrub.

Salt is an integral ingredient of just about any body scrub and unless you've been very lucky in life, you probably already know what happens when salt touches an open wound. Even without any obvious nicks, rubbing salt on freshly shaved legs (even the day after) can be a rather uncomfortable feeling. If you don't want to be embarrassed by hairy legs during a scrub, make sure to shave at least two days prior to your appointment. (For any other treatment, you might want to shave closer to your appointment if you're embarrassed by leg stubble!)

7. Don't forget to leave time to relax pre- or post-treatment.

While not all cruise ships have a relaxation room or free locker-room sauna, many do and taking some extra time before or after your spa treatment is often a nice way to pass some time, particularly on a sea day. Just keep in mind which treatment you're having; sitting in the sauna after a facial could diminish the effects of the treatment, for instance.

8. Don't get pressured into buying something.

If you've never been to a cruise ship spa, particularly on a ship on where the spas are run by Steiner Leisure (Carnival, Holland America, Royal Caribbean, P&O, Crystal, Norwegian Cruise Line, Seabourn, Princess), you haven't yet been treated to the post-treatment hard sell of beauty and facial products given by the staff. Even if you know it's coming and have steeled yourself not to buy anything, the therapist usually gives a sales pitch that's hard to resist. Keep in mind, they've been trained to make their products sound indispensable, so even though it all seems great, it is a sales pitch. Don't let them pressure you into buying something you don't really want and might never even use.

9. Don't get naked for a massage if you don't want to.

There are no rules in a spa that say you have to remove your underwear for a massage. A massage therapist is perfectly capable of giving just as good of a massage whether you've got your undies on or not; do whatever makes you feel most comfortable. She may also request that you leave your underwear on. That being said, if you're doing a full-body scrub or wrap with your massage, you'll want to switch out your underwear for the disposable ones they give you because it gets very messy.

10. Sometimes you do have to bare all.

We realise this is a bit of a controversial statement, as people from different parts of the world have different beliefs when it comes to nudity. So perhaps, it is better to simply try to be respectful of others around you. If you're totally comfortable with nudity but everyone else in the steam room is covered up, the polite thing to do would be to cover up the important bits. Alternatively, if you don't want to get naked but everyone else is, that's fine, but don't judge them for it. One place you are required to strip off is Diamond Princess' Japanese baths; while there are hours that swimwear is permitted, other periods are designated as 'nude time'. In the Thermal Spa:

Thermal spas are meant to be oases of calm in the midst of a busy cruise ship. It's where cruisers go to relax, read a book, maybe even nap. Don't ruin that for everyone by chatting loudly with your best friend. And don't assume the person sitting next to you wants to make small talk either. Chances are she or he just wants to sit quietly.

We know many of you love a good sweat in the sauna or steam room, but please pay attention to how long you spend in one. Not only might you end up looking a bit pruney (particularly after a steam room), but you run the risk of seriously dehydrating yourself. Bring water and some kind of timer with you if possible to ensure you don't spend too much time inside.

13. Don't be afraid to try the cold rooms or plunge pools.

It might not sound relaxing to sit in a room set below 35 degrees Fahrenheit or take a dip in a pool with water hovering around 50 degrees, but a five-minute exposure to such temperatures is actually quite good for you -- and if you've first been in the steam room or hot tub, it doesn't actually feel so bad. Give it a try; at the very least you can tell your friends how brave you were. And while we're on the subject, don't forget to ask at the spa entrance if there's a preferred order to the activities in the thermal suite -- i.e., should you hit the sauna, then snow room and then aromatherapy shower or does the salt room come first?

Not to be gross but feet can have all kinds of icky germs on them. To protect yourself -- and others -- wear the spa-provided sandals or your own thongs whenever you're hanging out in the thermal suite.