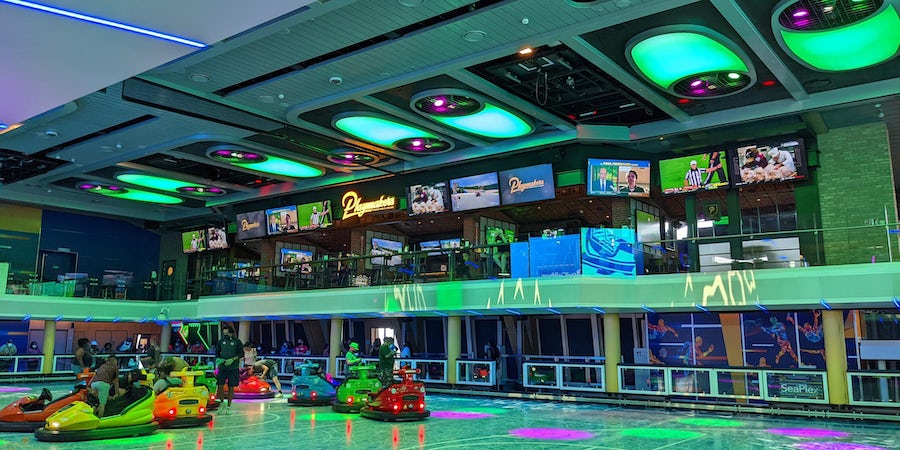 Just Back From Odyssey of the Seas: Why Playmakers Is The Best Cruise Ship Sports Bar

Traditionally, taking a cruise has meant taking a vacation from your favorite big sporting events. For many people, that's totally fine. But for sports nuts, it could be downright painful to miss even a single game of the NFL season or a midseason baseball game between rivals.

Fortunately, the dearth of onboard sports is changing, thanks to better satellite signals and improved Wi-Fi connectivity. And cruise lines have upped their game in terms of spots for viewing.

We've just returned from sailing Odyssey of the Seas, Royal Caribbean's newest ship and the first in its vaunted Quantum Ultra Class to debut with the new Playmakers Sports Bar and Arcade.

A true sports bar in every sense, Playmakers offers up beers (including a nice selection of craft brews) and pub food with plenty of options for viewing. Playmakers Sports Bar and Arcade can be found on eight ships in the Royal Caribbean fleet (counting Wonder of the Seas, which debuts in 2022).

Here's why Playmakers on Odyssey of the Seas is the best cruise ship sports bar.

You're Surrounded by Screens

By our count, Playmakers on Odyssey of the Seas offers 56 TV screens, all hi-def. There isn't a bad seat in the house, and you can watch multiple games from any spot, whether you're sitting at the bar, at tables or high tops, or in the Owner's Lounge -- a corner space that feels a bit like you're watching from your own living room, but in a great way. (The Owner's Lounge is free, but it's first come, first served, and waitstaff will "close" the area with a velvet rope, so it feels exclusive.)

Playmakers also has a giant TV screen that hangs over the SeaPlex sports court (more on that below), so you can belly up to the railing, which has a ledge for your drinks and food, and enjoy the game on a TV so large, you can count beads of sweat.

The Food and Beer Selection is Excellent

In keeping with the genuine sports bar approach, Playmakers on Odyssey of the Seas offers a sizeable menu of bar snacks: chicken wings, nachos, onion rings, burgers and chicken sandwiches. These are priced a la carte.

We like that the prices are fairly nominal: You'll pay $10 for 12 wings, $9 for a huuuge burger and pile of gourmet fries, or $6 for a big plate of nachos. It feels like an appropriate upcharge, especially for delicious for bar snacks. If you're going to try just one thing, give the poke nachos a shot. Loaded with raw ahi tuna, nori and sriracha aioli, these nachos are actually wonton wraps deep fried. The portion size is ample (super sharable), and the ingredients are fresh. If you're craving sweet, don't skip the campfire cookie, topped with Nutella and toasted marshmallows, served with milk shots.

But it's not just the food that has us excited; Playmakers has the best selection of beer onboard, with true craft brews as well as a range of domestic and international options. Pitchers are available, as are flights. Beer selection is a traditionally weak spot for cruise lines, and it's nice to see Royal Caribbean up their game aboard Odyssey of the Seas.

The Service is Friendly and Intuitive

Calling out great service on a cruise ship is a bit saying the sun is bright: we all know crew are exceptional. But it somehow seems a cut above at Playmakers, where staff wear jeans and converse freely and casually with guests.

They also make great recommendations and bend over backward to find whatever game you want (within reason; Playmakers is restricted to what is offered and available at any given time).

We showed up on the first night of our cruise, ordering a beer each. On the second night, we returned and ordered the same thing. By the third visit, servers walked to our table with beers in hand, not even waiting for our order. We also enjoyed the "group" approach, in which we had a primary server, but others circulated to check in and see how we were doing. This meant we never waited long for a refill or to get extra napkins or a side of blue cheese. It also gave us a chance to meet more of the team, which quickly felt like we were making new friends.

Across the Royal Caribbean fleet, Playmakers has a different home depending on the ship. We've enjoyed games at Playmakers on the Boardwalk of Symphony of the Seas and midship on Freedom of the Seas.

Odyssey does it best.

Here, it's integrated into the two-level SeaPlex, an indoor sports complex that offers bumper cars, pickle ball, foosball and a huge arcade. Playmakers sits on the second level, with one side featuring a large bank of windows overlooking the ocean on the port side; the other overlooks the sports court.

That makes it ideal for families; kids can participate in activities on the court or play games at the arcade while parents relax and watch a game -- all while keeping an eye on everyone.

Even if you aren't traveling as a family, the location offers great seaviews and lets you stay in the action. Our only minor complaint is that many of the activities in the SeaPlex come with a DJ, who plays loud music to accompany the events and activities on the court. If you're sitting along the railing watching a game, you can't hear the game if a competing event is ongoing. If that's the case, your best bet is to move away from the railing and into one of the seating areas, where the volume is controlled by the Playmakers team. (The bar offers five separate audio zones.)

What You Can Watch

Games offered in Playmakers during your cruise are listed on a card, sitting on each table, so you can quickly check for the featured game. Our cruise, which took place late in the summer, just ahead of the NFL season, featured a variety of baseball games (MLB and Little League), MLS and EPL soccer and a sprinkling of NFL preseason games. It's not like at home, where a bar might buy a sports package and you can request your favorite team be on the TV right in front of you.

That said, during the NFL season, you'll likely be able to catch your game, as the bar will offer a variety early and late matchups, and it will show the Thursday, Sunday and Monday night games. Playmakers wasn't busy during our cruise, but based on our experience at other versions of this venue, we expect it will be for football on Saturdays and Sundays in the fall, so plan to get there early.

It's been fun to watch the evolution of sports bars on cruise ships. With the addition of Playmakers on Odyssey of the Seas, there's finally a venue at sea that rivals your favorite sports bar on land.