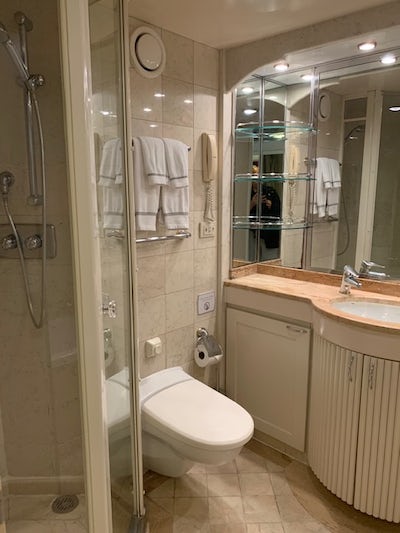 The BEST Cruise Ever!

We decided to book this cruise rather late in the game as Regent kept sweetening the deal with OBC and business air. The itinerary was 21 days and took us from Dubai to Barcelona, including ports in Oman, Jordan, Egypt, Israel, Cyprus, Greece, and Italy. I imagine that the unpredictability of the Middle East scared off many passengers but by the time we sailed, we had 680 hardy passengers on ...
Read More

We had some doubts after reading several reviews regarding the ship, especially the availability of good wines by the glass and the standard of service. However once on board we had no issue with the quality of wine, when asking for some other region of wine the staff were very obliging and delivered. The standard of service was exemplary apart from the shore excursion team who seemed to be ...
Read More

Like the story of the "Curate's Egg" - very good, but only in parts!

This was our first Regent cruise, our preferred cruise lines being Silversea (for luxury cruising) and Swan Hellenic (for 'discovery' cruising). I am very lucky and have been cruising regularly since the 1970s and so know the industry pretty well. We made our own flight arrangements and flew to Dubai by daytime flight with British Airways and stayed at the very good (and very inexpensive) ...
Read More

This was our first cruise and, having undertaken extensive research, booked RSS with the USP of Holy Land tours included. We travelled business class from LHR on Virgin, which was the worse business cabin we have ever experienced. Dubai hotel, JW Marriott Marquis, was excellent. Embarkation was very well managed and lunch on the pool deck was a wonderful start to our trip. Our Butler Suite, ...
Read More

A point by point list of my impressions on my first cruise wth Regent. First off, Regent's Scan Design style of decor is not to my liking, which is a shame as it set the tone for my first impressions of the ship. However as I was lucky enough to get this cruise at an amazing price, my negative initial first impressions were offset by the quality of almost everything else that Regent is known ...
Read More

We have just returned from a superb holiday on Seven Seas Voyager doing their Red Sea Odyssey and have to say the staff and service were again excellent, attentive and charming . We were treated royally. We were on Seven Seas Voyager in September and were very impressed that is why we have booked again so quickly. To summarise, there are some cruise lines that will do the least they can get away ...
Read More

Sadly, that's what this cruise turned out to be. We have cruised with Regent previously - our last cruise was from Mumbai to Bali in December 2012. That cruise rated a 9 out of a 10 for us. However, our cruise in 2013 from Istanbul to Dubai did not come close to living up to expectations. At best, the onboard experience was a 5. There were several very disappointing aspects to this cruise, ...
Read More

Not disappointed at all

We have sailed on the Mariner before, but the atmosphere on this cruise ( Empires of Antiquity) seemed to be more relaxed and organized. Perhaps it was due to Captain Felice Patruno and Cruise Director, Lorraine Weimerskirch. We've been sailing on the Seven Seas ships since 1992 and this is the first cruise with Captain Patruno and Lorraine. The crew seemed to be very happy with their jobs and to ...
Read More

Wowed by Mideast cruise and post-cruise tour to Egypt

We cruised from Venice to Monte Carlo on Mariner last spring and had a pretty good experience. When we found this amazing 14-day itinerary from Istanbul to Luxor with an included post-cruise tour of Egypt we decided to give Regent a chance to wow us and they delivered on every level. Overall we thought the service level had been kicked up a notch from Mariner and the staff were warm, attentive, ...
Read More

Sanctuaries in the Sand

This was our second Regent cruise, and the first on Voyager. We selected a standard balcony suite on deck seven. No need for a butler on Regent, as the housekeeping and room service staff take care of everything, except perhaps that extra night in the speciality restaurant, that you want, but don't want to do it for yourself. The cruise from start to finish was well done. We arrived a day ...
Read More