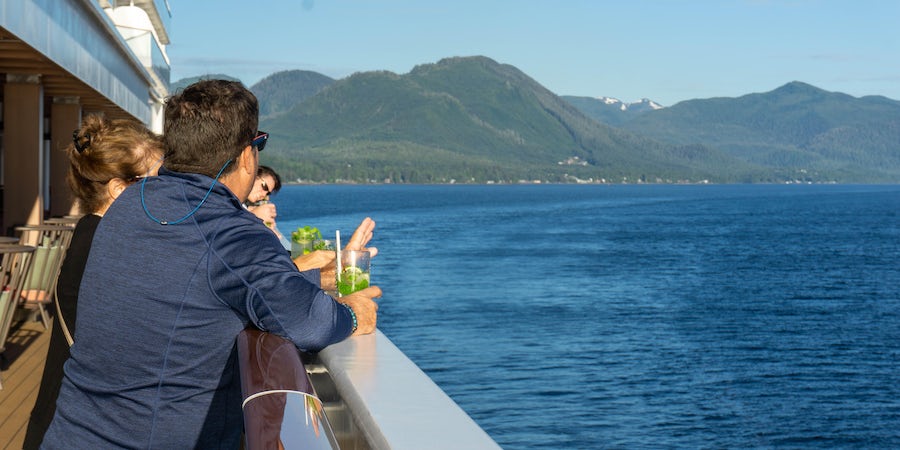 Just Back from an Alaskan Cruise Aboard Norwegian Encore: Hits and Misses

Norwegian was the last of the big-ship cruise lines to restart service on the West Coast, becasue it is doing so with some of the most stringent health protocols afloat, including mandatory vaccination against COVID-19 for all onboard, mandatory pierside antigen testing, and new facial recognition software that allows for touchless embarkation, disembarkation, and customs procedures.

Norwegian Cruise Line sailed back into Icy Strait Point, Juneau and Ketchikan with new port facilities at Ward Cove, upgraded menus, a roster of new shore excursions, and a great ship that is surprisingly well-suited to Alaska's changeable weather patterns.

One Hundred Percent Vaccination and Testing

Because of that, the ship formed a bubble of just over 2,000 fully immunized cruisers, all of whom could walk around maskless. But it's more than just masks: dancing, production shows and live music were all back.

While masks were still required on land in Alaska in many situations, including when indoors and on motorcoach tours, locals we spoke with were keen on Norwegian's fully vaccinated policies and the extra protections it brought them.

Referring to other cruise lines allowing up to five percent of passengers to be unvaccinated in accordance with U.S. Centers for Disease Control and Prevention guidelines, Norwegian Cruise Line president and CEO Harry Sommer said during a press conference onboard Norwegian Encore: "On a ship this size, five percent represents 200 passengers and 100 crew. So that means on a ship this size, you can have under the CDC guidance 300 unvaccinated people. I don't want to be in a situation -- I won't be in a situation -- where as a company we have the potential to expose 300 people to COVID."

And if you're an international passengers -- as I am, being Canadian -- Norwegian covers the cost of onboard antigen or PCR testing for those who need it prior to disembarking and returning to their home countries.

After being in such a protective bubble for seven days, being thrust out into the real world -- where the Delta variant has a growing hold -- was striking. Our mid-morning arrival at Sea-Tac Airport was shocking for its gate-to-gate crowds, its lack of distancing, and its complete lack of vaccination mandates or testing for most air travellers.

Sommer told assembled media at several press events that they had used the downtime during the pandemic to upgrade the line's food and beverage offerings. He wasn't kidding.

Food -- historically a bit of a shaky point in Norwegian Cruise Line's history -- was absolutely delicious aboard Norwegian Encore. And while that might be expected in the line's classy Le Bistro French restaurant or in the delectable Onda by Scarpetta, that high quality extended to the ship's complimentary dining venues as well. We had one of the best bowls of Italian Wedding Soup we've ever tasted in the intimate dining venue Savor on Deck 6, while the casual fare (and the small personal carafes of coffee) in The Local on Deck 7 was consistently good.

Other surprise winners: the American Diner up on Deck 17 aft that served up reasonably priced classic American fare (including some delicious fried chicken), and Q Texas Smokehouse, a Western-inspired celebration of delectable meats tucked away on Deck 6 forward.

We recommend indulging in at least one of the line's extra-charge specialty restaurants like Le Bistro, Los Lobos and Ocean Blue. Plus, Norwegian offers dining packages that make these eateries more inclusive by charging upfront for them.

I'll admit it: I thought Norwegian Encore gimmicky when it first came out. So much buzz surrounded its more unique features (go-karts! Laser tag!) that I assumed it would be wrong for Alaska.

While I might not choose the ship just to go go-karting (though our spin around the track in Ward Cove was highly enjoyable), there is plenty of other stuff to keep you entertained.

Personally, I gravitated to the Thermal Suite in the Mandara Spa for on sea days and evenings. I spent early-mornings writing and reading in the stunning Observation Lounge forward on Deck 15, the largest and most elaborate such venue I've ever seen aboard a ship.

Trivia sessions and movies in the Deck 6 atrium landing grew more popular as the voyage went on. Pub tunes packed the house in The District Brewhouse most evenings.  Afternoon cocktails at the outdoor Sail and Sustain Bar -- dedicated to craft cocktails made with items that would otherwise be thrown out -- became en regle for the small group I travelled with.

Production shows -- like Choir of Man -- delighted with their modern take on shipboard musicals. (Have you seen a shipboard production show with a full-scale pub complete with beer tap used to pull pints for the audience? )

Our takeaway? -- you can do as much or as little as you want -- but you'll never be bored. And it's a perfect fit for Alaska.

Chalk this one up to a restart after an entire season of inactivity, coupled with new rules and regulations no one has ever had to contend with before. People had already queued up for two city blocks outside on the street, waiting for their pierside, pre-cruise antigen tests, by the time we arrived just before Noon on embarkation day. The process was unclear, with reps on the ground providing conflicting information as to where to go -- and what to do next.

This extended to disembarkation day, where the Pier's restricted location in the heart of downtown Seattle is both a blessing and a curse owing to the chaotic traffic in the area. Pack some patience, or simply plan to embark in the early afternoon for a better embarkation experience.

While Norwegian Encore's Alaskan itinerary is a great one, port times always seemed to be cutting things a little short. The call in Juneau from 6:00 a.m. until 1:30 p.m. results in incredibly early-morning tours and doesn't really leave much time to explore and take advantage of Alaska's capital city. Ditto for Ketchikan, where the new docking facilities at Ward Cove some seven miles out of town result in the need to watch the clock in order to be back on ship on time, as the last shuttle departs some 45 minutes before the all-aboard call and the process to get into town is, as of this first sailing, slow.

It just never worked for us onboard. Not even once.

As Norwegian Cruise Line restarts and fine-tunes its season in Alaska, expect these kinks to be worked out. Cruisers should, as on any voyage, remain flexible, as onboard policies and restrictions can change by the hour.

Norwegian has really put its money where its mouth is, opening new facilities in Icy Strait Point and in Ward Cove, and plans to improve upon these investments well into the future.