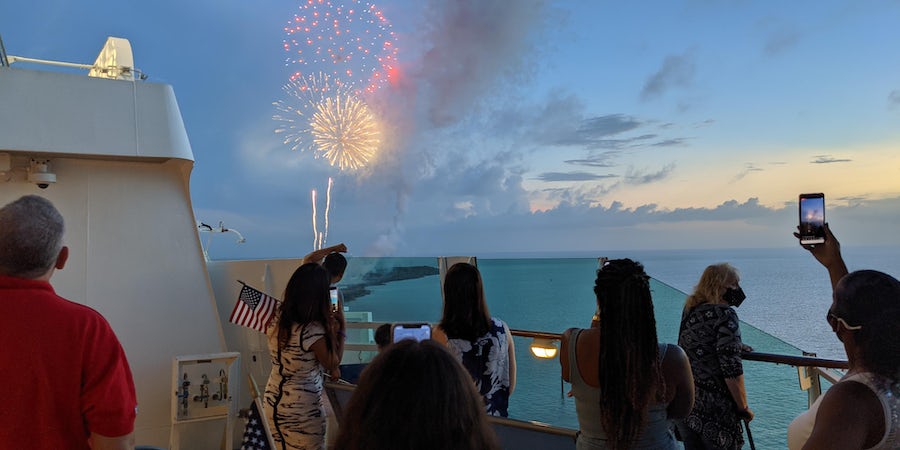 Fireworks aboard Freedom of the Seas, July 4, 2021. (Photo: Colleen McDaniel)

Surprise and Familiarity Abound as Cruising Returns: Just Back From Freedom of the Seas

Fireworks aboard Freedom of the Seas, July 4, 2021. (Photo: Colleen McDaniel)

(1:05 p.m. EDT) -- Standing on the sun deck of Freedom of the Seas watching the Fourth of July fireworks illuminating Perfect Day at CocoCay, I found myself smiling one of those grins that starts to strain the corners of your mouth, it was so big.

A celebration of Independence Day was paired with a party to welcome back cruising from the United States, and the joy was contagious. Passengers onboard waved American flags and "ooed" and "ahh'd" as fireworks burst into reds, blues, greens and golds.

Off our bow, four sister ships from Royal Caribbean joined in to watch -- with only Adventure of the Seas also hosting passengers.

After more than a year without cruising, the moment was special. Freedom of the Seas became the first Royal Caribbean ship to sail from a U.S. homeport since March 2020, leaving from Miami on a three-night cruise that included stops in Nassau and private island Perfect Day at CocoCay.

Onboard the ship, watching the spectacular celebration alongside happy guests and company executives, including Royal Caribbean Group Chairman Richard Fain, the relief was palpable. The sailing and the show were the culmination of months of work to return to sailing while keeping everyone safe and healthy.

Cruise Critic was onboard for the sailing and got a glimpse of what cruising on Freedom of the Seas is like.

Freedom of the Seas, which can hold 4,500 passengers, is sailing with capacity restrictions for the short term to ensure physical distancing and slowly ramp up after 15 months of waiting. On our sailing, that meant we cruised with about 1,000 passengers. Of those, more than 125 were children.

That about jives with a typical Royal Caribbean sailing; the company says it averages about 10 percent. It's also why the company elected to sail with both vaccinated and unvaccinated passengers on its ships, according to Royal Caribbean President Michael Bayley. (The U.S. Centers for Disease Control outlined two paths for a resumption of sailing: one required 95 percent of all passengers to be vaccinated, the other didn't specify a percentage of vaccinations but required cruise lines to run simulated voyages. Royal Caribbean successfully completed a test sailing on Freedom of the Seas prior to this first revenue voyage.)

Kids sure seemed to be enjoying the cruise, spending time in the children's clubs, the pool and at the brand-new Splashaway Bay, as well as beach time at Perfect Day at CocoCay.

Mark Tamis, the company's senior vice president of hotel operations, told Cruise Critic it was always the company's intent to allow for families to return to sailing; following the 95 percent restriction simply wasn't going to happen.

"It wasn't ever a choice," Tamis said.

The company requires all eligible passengers to be vaccinated, except for sailings from Florida, where state law prohibits that condition. In Florida, Royal Caribbean instead encourages people to be vaccinated, and has restricted some of the movements of unvaccinated passengers. The majority of those restrictions on Freedom of the Seas affect areas that children probably wouldn't visit anyway: the casino, the spa, the fitness center (except for certain hours), the adults-only Solarium and various bars.

Freedom of the Seas underwent a massive refurbishment as part of the cruise line's Royal Amplification program. The $116-million investment focused on updating and adding to the public spaces. The enhanced ship debuted in March 2020, sailing only one cruise before the pandemic forced the industry to shut down.

Our favorite spot might be Playmakers, the cruise line's ubiquitous sports bar. This is located midship, just off the casino. It's a true sports bars, with lots of flatscreen TVs, a pool table, arcade games a fair amount of seating.

It also offers a substantial bar menu, with options including three kinds of burgers, sliders, wings and nachos. But the desserts are king, so save room for the giant s'mores inspired campfire cookie or seven-scoop ice cream spectacular served in a football helmet.

The most-noticeable improvements came on the pool and sun decks, which were completely overhauled, adding bright punches of color, shaded (free!) casitas and a new Lime and Coconut pool bar. Pool loungers were added, and the nearby Solarium was refreshed.

The pool deck also got a new taqueria, El Loco Fresh, which offers a variety of Mexican foods, like tacos, burritos, quesadillas and nachos, along with a hot sauce and salsa bar. Flour tortillas are made and pressed fresh, right in front of you.

Adjacent to the main pool is the new Splashaway Bay, which offers all kinds of features that will keep kids delighted and wet for hours: dump bucket, kiddie pool and mini waterslide, for example.

Food is a Hit, Even with Restrictions

Freedom of the Seas is sailing with a reduced number of crew as well as fewer passengers than is typical. That does mean hours and seating capacity are limited in some venues.

The most notable in terms of restrictions was the Windjammer buffet, which isn't open for dinner. Previously, this was the ship's best option for casual evening dining, but for now, passengers will have to try other venues for dinner.

Still, we liked some of the changes we saw in Windjammer, where meals seem more refined. For example, every morning, you can get avocado toast, and you'll have a different type each day. They've also added rope sausage at breakfast, and a carvery with rotating selections of meat. (Worth noting: The Windjammer doesn't require reservations but is no longer self-serve; waiters will plate your picks for you.)

Linken D'Souza, Royal Caribbean's vice president of food and beverage, told Cruise Critic the line is working to ensure it's delivering what the guests want, and that results from a simplification of the menu and consistency of quality, touching everything from glassware to garnish.

"Everything we do should be really good and really consistent," D'Souza said.

The approach seems to be working on Freedom of the Seas, where specialty restaurants on our sailing were fully booked, and guests lingered over dinner in the main dining room, perhaps hoping to cling a little longer to the this first cruise back.

The July 4th fireworks fading and smoke hanging on the horizon, horns from Freedom of the Seas' sister ships blasted a congratulations, and our ship responded in kind. Perhaps soon, those cruise ships, too, will be sailing with passengers onboard.