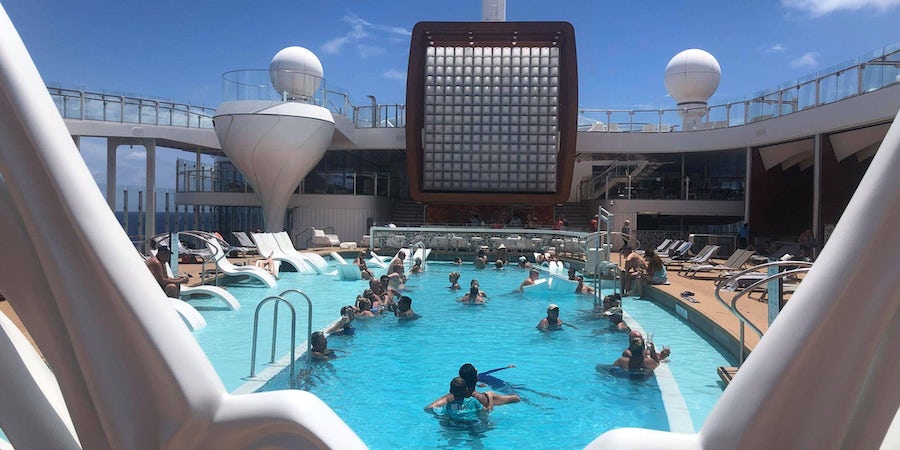 Live From Celebrity Edge: A Cruise That Seems Normal Again; "I'm So Hopeful"

(7:20 a.m. EDT) -- It feels like old times here onboard Celebrity Edge, which left Fort Lauderdale June 26 on a cruise that will go down in history as the first mainstream ship to leave a U.S. homeport since the COVID-19 pandemic began.

No masks for passengers. No social distancing. No signs around the ship or placards on the floor warning people not to stand close together.

It's markedly different from my experience just weeks ago on sister line Royal Caribbean's Adventure of the Seas. While that cruise still felt fun as the people onboard were excited to be back, reminders of the pandemic still seemed to be present on the ship, from the much-reduced seating in the theater and bars, to new Windjammer buffet protocol.

Not so on Celebrity Edge. The Martini Bar is fired back up, with people sitting on bar stools. The fitness center is open whenever you want to go (although Pelotons require a reservation). We sat with strangers at dinner in Eden, making new friends.

One good thing to have come out of the pandemic (in terms of new onboard protocols) whether on Royal Caribbean or Celebrity, is the e-muster process. It's simply so much easier to view the app and check in on your own time, rather than in a forced crowd. Royal Caribbean Group CEO and Chairman Richard Fain said that the company's surveys are showing that people are actually retaining the safety information longer by using the app, than they did under the old method.

As my Cruise Critic colleagues have seen on the other Celebrity Cruises restarts in St Maarten and Greece, the only real visible difference in the Oceanview Cafe buffet is the fact that it's served by masked crew. All of the favorites, such as Celebrity's Indian cuisine station, are still there. You can still eat as much as you want, a danger when the dessert of the day is a Cupcake Station. But unlike on Adventure, passengers can get their own coffee, water and juice, which does make things seem more normal than having a crew member do it for you.

In fact, the only real difference on the ship, from life before the pandemic? No crowds. Celebrity Cruises has capped capacity on Edge at 36 percent. The line is going to continue to do so as the cruise industry continues to work through what Fain described as a "transition period."

Another difference is that 99 percent of the people onboard are vaccinated. The voluntary system that Celebrity has put in place to screen guests for proof of a COVID-19 vaccine, as well as the extra costs that will fall upon passengers if they are not vaccinated, seem to be a deterrent. With a premium price tag and a design-forward approach, Celebrity Edge is not a ship that typically draws scores of kids anyway.

Joyful Day at Sea, Reflections on the Restart

The mood onboard Sunday seemed as positive and upbeat as Saturday's historic restart (and the sunny humid weather contributed to Sea Day R & R). The pool area was busy, with happy passengers taking in the drink package. Members of a wedding party trouped up to the Retreat Sundeck. On a bridge tour with perhaps the world's best-known cruise ship captain, Celebrity Edge Captain Kate McCue, we met her Insta-famous hairless cat Bug Naked, who seemed nonplussed by her fans.

At a press conference today, McCue, Fain and Celebrity's Senior Vice President for Hotel Operations Brian Abel spoke about what the sailaway on Saturday meant to them, and how it feels to be back on the water.

"It was very emotional. All year has been an emotional time," Fain said. "We've waited 15 months. None of us imagined it would be 15 months, so it seemed endless. Now it seems like a mere blip."

"The thing that was most emotional was talking to some of the crew….We've got hundreds and hundreds of crew….Without exception, they are so overwhelmed and they so happy and how any of them said "I feel like I'm home" and that was really quite moving to me."

"There are no words to really describe the feeling of yesterday sailing away." Abel said. "It's been a long road to get to this point, and to be sailing for the first time with guests, there were so many emotions going through my mind, from excitement to still a little stressed to really happiness for everyone that we were cruising,"

Abel's family was among the many people onshore near Port Everglades in Fort Lauderdale, waving to the ship as it pulled away from the dock. "There were a lot of travel agents there with bottles of Champagne, telling stories of how excited they were that cruising was back. It just goes to show you that it's a big family."

"For me, it was the moment that we said 'Let go of the lines,'" McCue said. "That's a big deal. That meant it was real. It was something we had looked forward to for so long.

"And in that moment, I had a realization that as much fanfare was going on – you saw the fire boats and the rainbow they were creating, the horn going -- to me, while I realized that today was such an important day for me, the day that's really going to matter is the day that our last ship at Celebrity Cruises starts sailing.