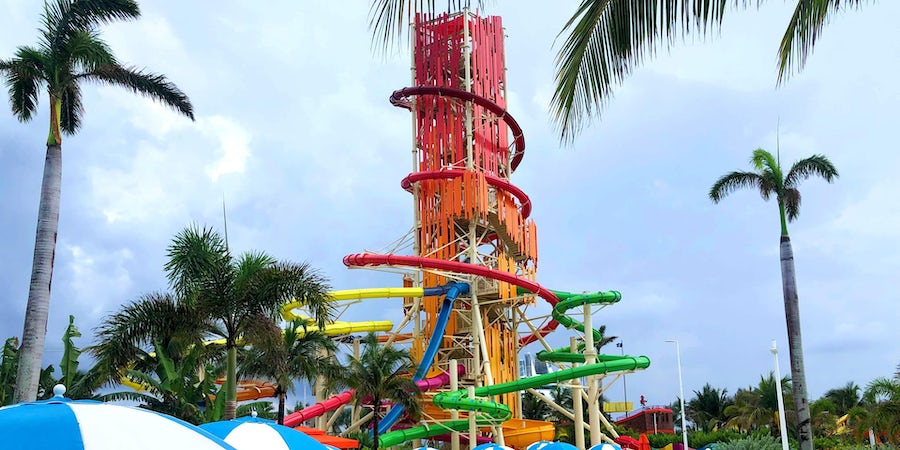 (5:20 p.m. EDT) -- As cruise ships get back up and running in North America, Royal Caribbean has a secret weapon that is already putting it ahead of the competition: Perfect Day at CocoCay, its private island.

The destination in The Bahamas received a huge glow up in fall 2019 when Royal Caribbean invested $250 million into making it a full-out resort, complete with a major waterpark that boasts North America's tallest water slide, the largest freshwater pool in the Caribbean, numerous eateries and beaches, and water excursions.

The addition of the upscale Coco Beach Club in the early days of 2020 ups the ante even more. The resort-within-a-resort carries a day pass fee, and includes an elevated lunch, where lobster and filet mignon are on the menu, as well as a separate infinity pool, beach chairs and a calming atmosphere. (Big spenders can splash out for private over-the-water private cabanas).

On Royal Caribbean's sailings from Nassau, Adventure of the Seas spends two days at Perfect Day at CocoCay. While this might sound repetitive at first glance, we found that it made the experience much more relaxing. There's no way that you can see and do everything on CocoCay in one day; with more time, you can really divide up your hours and relax. You won't need pack everything in and run around aimlessly. (Particularly if a Bahamian rain shower occurs, which is fairly frequent.)

Here are some of our observations from two days at Perfect Day at CocoCay:

With cruising just restarting in North America, your private island experience really feels like a private island. This first sailing only had 1,066 passengers onboard, and on an island that's built to handle two Oasis-class ships at full capacity, you really have a lot of space to spread out.

The Thrill Waterpark had absolutely no lines for the entire two days we were there. We could run on and off the waterslides as we saw fit, and parts of the park -- particularly those that catered to kids such as Splashaway Bay, were absolutely empty. It felt like there were more employees than people at times.

Likewise, there is no need to crowd at the free dining venues on the island. While not all of the buffet areas were fully open, there was more than enough choice. Even though you're now served all your food at the buffet, the reduced capacity means that you aren't waiting, at all, for anything to eat.

One tip: In these early days, it might not make as much sense to splash out for special cabanas and beach chairs, unless you're in the mood to splurge or just want to feel fancy (as we'll describe below at the Coco Beach Club). With so few people on the island, you will have your choice of beach loungers at most of the free venues.

Just as they have on their ships, Royal Caribbean has worked hard to make Perfect Day at CocoCay feel as much as it did before the pandemic. And for the most part, it seems to have succeeded.

The workers on the island, most of whom live onsite, are all fully vaccinated. Passengers can go off the ship without masks, which is extremely freeing in the hot Bahamian sun. The staff do wear masks, however, as an extra precaution.

You'll notice plenty of social distancing reminders, as well as hand sanitizer, when you walk around the island. Staff members encouraged us to sanitize at multiple points of our day -- when you ascend the stairs of the water slides, when you enter any buffet or bar, when you pick up any inner tubes or mats for sliding and when you head out to your cabana.

Another thing to watch when you pick up any tubes, mats or swimming vests for the kids -- the staff has put the sanitized items on one side of a peg board. Choose these, as opposed to the other side, where you put your things after you've used them.

At the Oasis Lagoon, the swim-up bar is open, although you're also encouraged to leave space among your fellow cruisers. Again, when capacity is so restricted, that's not hard to do.

Dividing Your Time Over Two Days

With the two days, we split our time roughly up into two themes. On the first day, we focused on adrenaline at the Thrill Waterpark, as well as relaxing with other passengers around the Oasis Lagoon. We found this strategy allowed us to plan better, and feel like we got the most out of the experience.

It's a long 14 stories climb to Daredevil's Peak waterslide, the tallest in North America. This slide goes fast, so it's the best one for speed demons. We actually found that we preferred the Slingshot, a two-person raft ride with a huge drop, over at Splash Summit. This area, which has its own cabanas, seems friendlier and more chill than the chairs near the huge Daredevil's Peak.

We did some shopping and ate a buffet lunch on our first day at the island. The South Beach area of the island was not open on our visit, due to reduced capacity. Because our first day was about fun in the sun, we walked around quite a bit to see if we could find enough other passengers to have that beach party vibe -- for people who love that kind of atmosphere, Perfect Day can seem quiet when just one small ship is in port.

We found those beach club vibes at Oasis Lagoon after lunch. The huge pool is popular for a reason -- besides the swim-up bar, it offers comfortable loungers both around the water so you can check out the scene and within the water. A DJ was spinning dance tunes as the afternoon wore on, and we saw happy cruisers line dancing to the Wobble, the Cupid Shuffle and other favorites in and out of the water. It felt pre-pandemic, with great happy energy.

We closed out Day 1 sitting on the rope swing chairs, a Coco Loco in hand, at Captain Jack's, listening to a singer cover Bob Marley, Jimmy Buffet and other Caribbean favorites.

The ship pulled away from Perfect Day at CocoCay shortly after 5 p.m. Although the island is wired for lights and might eventually host late nights, it takes the staff hours just to put everything back in place for the next day, we were told by Royal Caribbean's Senior Vice President of Hotel Operations Mark Tamis.

Coco Beach Club opened in early 2020, right before the pandemic began, so only a few cruisers have experienced the upscale resort in full. You can tell the difference in vibe as soon as you arrive. While Oasis Lagoon was loud, with Pitbull-dance music energy, Coco Beach Club is definitely more chill and adult.

Like the rest of Perfect Day at CocoCay, drinks are not included in your Coco Beach Club pass. (We found that most people had a drink or refreshment package, which does extend to Perfect Day and the Beach Club.) The club has its own cocktail menu, with decidedly more refined choices -- although you can still get that Coco Loco if you want!

The menu for lunch is worth the price of admission alone. The quality feels like what you would get at a specialty restaurant on the ship, and it's designed that way, we were told by Lincoln D'Souza, Royal Caribbean's global vice president for culinary, dining and beverage.

The starters come in individual bento boxes, full of finger snacks such as hummus, baba ganoush, shrimp cocktail and ceviche. These boxes are large; we realized quickly that we should have skipped breakfast that morning.

You can still get a burger, if you want one, as a lunch entree. But why stop there, when you can get the island's signature Coco Lobster Sandwich? The lobster is crusted with coconut and served with an avocado relish and pineapple salsa, and it's one of the most delicious things I've eaten in the Caribbean. The truffle fries that came with it were perfectly seasoned, crispy and salty like you want them. (D'Souza says that he's a fry snob.)

Seasoning was a theme throughout the menu, from the filet mignon to the garlic tiger prawns. You can even get Bahamian lobster (or more than one -- you can order as many entrees as you want). For those who don't like seafood, here's a secret menu tip -- you can order a chicken version of the lobster sandwich, which comes out just as crispy as the original.

Desserts are another highlight, so you'll want to save room. The rum cake has plenty of alcohol in it, so it's definitely more for the adults (unless, as D'Souza said, you want your kids to take a nap). The brownie is indulgent but we were just as satisfied with the mango sorbet.

After all this food, we retreated to our cabana to sleep things off. (Cabana guests can have the entire menu delivered to their hideaway, with the food biked out by staff over the wooden walkways.) The cabanas have a shaded area for sitting, a small slide into the water, a hammock at water's edge, a full-sized table for dining and multiple loungers. There's a lifeguard out near the cabanas, so you feel safe swimming and floating within the area.

We finally toddled back to the ship around 4 p.m. that second day, sun-drunk and satisfied with not just one, but two Perfect Days. The only thing we didn't do was take the Up, Up and Away hot air balloon ride. It's heavily weather dependent, and the winds just didn't cooperate.

Oh well. It just means I need another Perfect Day.