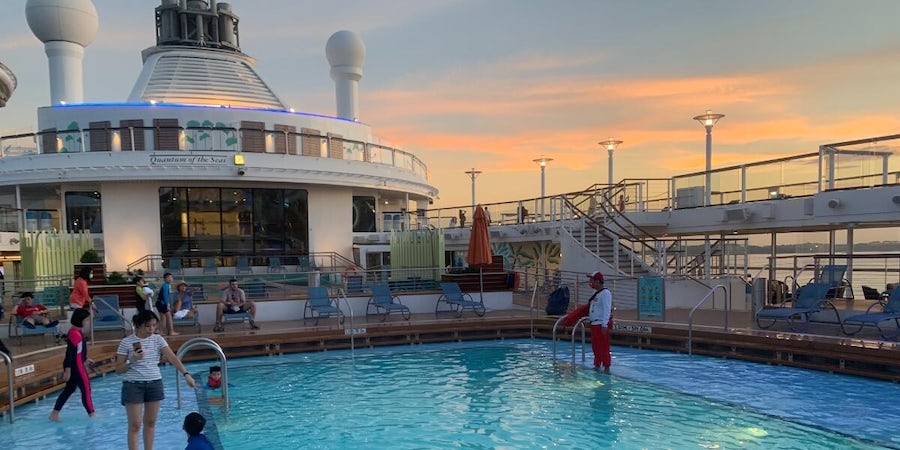 The Pool on Quantum of the Seas (Photo: masteradept/Cruise Critic member)

The Pool on Quantum of the Seas (Photo: masteradept/Cruise Critic member)

(12:20 p.m. EST) -- A major milestone was marked December 1 in Singapore, as Royal Caribbean's Quantum of the Seas set sail on its first cruises from that city since the global health pandemic began.

Aside from being good news for the hard-hit cruise industry, Royal Caribbean's first return to the seas in nearly nine months is also providing a tantalizing glimpse at what the company's sailings may look like when the line returns to broader service next year. The line instituted a bevy of new guidelines and policies for its return to Asian waters; it's also worth noting that Singapore is only reporting a handful of coronavirus cases, as opposed to the surging numbers in Europe and the United States.

Cruise Critic member masteradept has been posting live from the run-up to the sailing on the Royal Caribbean boards, and shares what sail-away looked like.

"The booking process is much the same as usual," writes masteradept. "I noticed that Inside and Oceanview (no balcony) cabins were unavailable, and only Balcony and Suites could be booked.

"During the booking, various conditions were highlighted. For example, the cruise was only open to residents of Singapore (even as Singapore has opened to some countries such as Australia and New Zealand, visitors from there without residency will not be allowed on board). The requirement for a PCR test was also highlighted, as well as the offer from Royal that the cost was included in the booking."

Masteradept notes that the COVID-19 PCR testing process was relatively painless, if uncomfortable. Royal Caribbean provided a personal reference number with directions on how to apply for testing online roughly two weeks prior to sailing. Results were available in less than 24 hours.

One day prior to sailing, the Royal Caribbean App prompted Masteradept to complete a medical questionnaire online.

"I got a notification to do that the morning of the cruise, and it looks like you just have to open up the app, and while you can watch the video and listen to the emergency signal audio, they didn't look compulsory," writes Masteradept. "Looks like we'll still have to at least report to our muster station though, just to check in."

Masteradept showed check-in photos that reveal new signage has been created, including banners prompting passengers to complete their medical forms and E-Muster drills prior to the ship setting sail.

A photograph of the in-room tv onboard Quantum of the Seas also prompts passengers to complete the new E-Muster drill prior to sailing and lists a countdown clock with time remaining.

Completion of the muster drill will be mandatory. Presumably, those who do not complete the drill will be asked to leave the vessel.

Royal Caribbean has also provided masks, hand sanitizer, and contact tracing bracelets for all passengers onboard. The printed Cruise Compass daily program was not placed in the room, but instead was available on the Royal Caribbean app or upon request from the Guest Services desk.

Photos taken by Masteradept reveal that reservations are required for all onboard shows, though this should not come as a surprise to anyone.

Menus in the Main Dining Room, and presumably in other venues, are displayed on digital screens or can be brought up on any smartphone using the QR code image.

Masteradept says that physical menus are available upon request.

"By default, they don't hand out physical menus, and there's a QR code to scan, but they do ask if you want a physical menu, which I was happy to accept for science. "

The Windjammer Buffet is indeed open, though staff will now serve you your food. Self-serve options are gone.

Whirlpools are limited to one group (your group) at a time. Royal Caribbean has even come up with clever signage to advertise this, called "The Whirlpool Rule."

Signage around the vessel reminds passengers to practice social distancing, and to wear masks when not eating or drinking.

Quantum of the Seas is at sea today as its first journey begins. Join in the discussion and follow along with Masteradept's posts on the Cruise Critic message boards