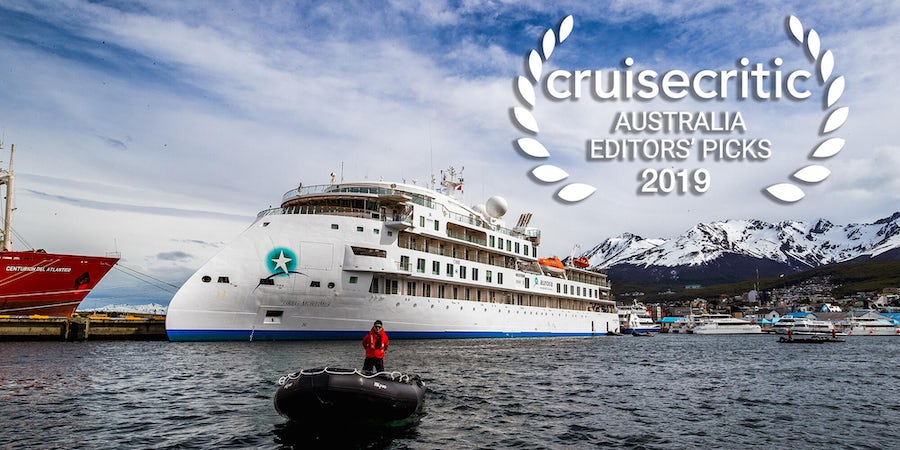 (7 p.m. AEST) --Two expedition ships have taken out top honours in Cruise Critic’s Australia Editors’ Picks Awards for the first time. Both winners, Greg Mortimer and Scenic Eclipse, were launched this year by Australian companies and impressed a global panel of judges with their design innovations, dining, activities and crew. A further 19 awards for excellence were also announced in categories such as entertainment, nightlife, cabins, shore excursions and value.

Aurora Expeditions' Greg Mortimer won the big gong for Best New Ship, largely applauded for its efforts in sustainable cruising. Groundbreaking features include 'virtual anchoring' to protect the ocean floor and a pointed bow that reduces fuel consumption (and seasickness, because of the way it cuts through waves and ice). Among other highlights are hydraulic viewing platforms that fold out from the ship's sides so passengers can watch the action -- or the wildlife -- from closer to water level in destinations such as Antarctica and the Arctic.

Silversea, which bases Silver Muse in Australia and New Zealand each summer, was named Best For Luxury thanks to its elegance, butler service and wide range of bars and restaurants on small ships. Also in the luxury category, Viking was recognised as Best Value for Money, winning praise for its stylish decor, intuitive staff, great spa and dining.

A newcomer to our shores, Dream Cruises' Explorer Dream nabbed Best Refurbishment, most notably for its spectacular centrepiece, The Palace, an exclusive haven of upgraded accommodation, oceanview pool, private casino, bar and restaurant.

Celebrity Cruises retained the Best Cabins award, particularly for the luxe look of its newest ships Celebrity Edge and Celebrity Flora. The line also scooped Best Dining for its superlative combination of food, wine, service and ambience in every venue.

The coveted Best for Families award went to Royal Caribbean for its extensive choice of accommodation, entertainment and activities. For the fourth consecutive year, Carnival Cruise Line, which introduces Carnival Splendor to Australia next week, was declared Best Value for Money among the local line-up of family-friendly ocean ships.

Cruise & Maritime Voyages was named Best For Solo Travellers due to the fact it has the large number of single cabins and dedicated solo events. This week the line welcomed a new ship to Australia, Vasco da Gama, which will mainly sail out of Fremantle and Adelaide.

Azamara held on to its Best Service award for the way that everyone, from waiters to senior officers, make you feel like a special guest in their home at sea.

In the river category, the all-inclusive APT took out the Best River Cruise Line award. Travelmarvel appeared in the finalists for the first time, winning this year’s Best Value River Cruise Line for its affordable fares yet premium experience.

The fourth annual Editors’ Picks Awards were announced by Cruise Critic, the world's largest cruise reviews site and online cruise community. The awards are selected by a global panel of impartial cruise experts and highlight the best ocean, river and luxury cruise lines for Australians, across more than 20 categories.

Louise Goldsbury, Managing Editor, Cruise Critic Australia, said: "With so many new, improved and wildly different cruises around the world, it's getting harder to compare and choose our favourites. These awards name the best ships and cruise lines, specifically for travellers in our region. They’re selected based on our editors’ impartial cruise expertise, first-hand experiences and industry knowledge to help travellers select the best cruise for them."