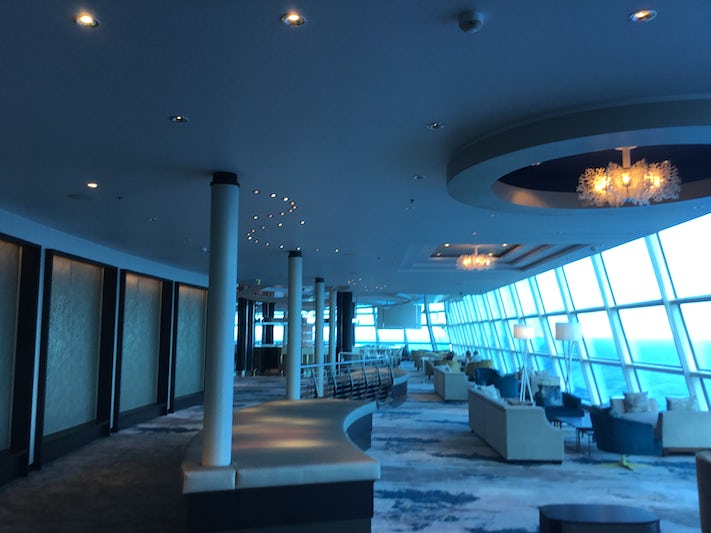 We have cruised annually in recent years with our teenage children and this time and on Celebrity due to the suitability of the departure from Bayonne at the time of year we were travelling to the USA from Australia. Getting to the port of Bayonne from Chelsea Manhattan was a quite a challenge with no Manhattan cabs wanting to take us. Ended up getting the Path Train to New Jersey, and then the ...
Read More

Disappointment - expected much more from Celebrity

Review for Celebrity Silhouette to Transatlantic

Embarked in Bayonne, where an expensive pen set disappeared from the check in bin. we noticed immediately, but no one saw anything and since we thought there was an outside chance we left it at home (which we didn't) and decided not to press the issue. We had requested rhe First seating at a table of 6 to 8, and were put on a standby wait list. We wound up at a table for two , situated not 8 ...
Read More

Bayonne, NJ: Getting on and Getting off were very easy. I was pleased we didn't have the problems others had or Celebrity got their act together. We left out of Bayonne a few years earlier and it was a madhouse with people getting off ship at the same time. It pays to wait your turn. Bayonne parking was a ripoff for $228.00. They could have washed the car for that. But we were happy that ...
Read More

Review for Celebrity Silhouette to Transatlantic

My sister and I decided to be adventuresome and the 2 week Trans-Atlantic cruise aboard the Celebrity Silhouette. We began our cruise out of Bayonne, New Jersey. When we pulled into the area where the cars were lining up with the passengers to embark, I was somewhat anxious that the process would take over an hour or more. But, to our surprise, the cars moved forward at a nice pace and within ...
Read More

Embarkation: A breeze. We arrived at Bayonne via bus (Entertainment Tours) at noon, and were sipping our welcoming champagne at 12:30. (We were Concierge class which had a short, fast moving line.) Room: Rm 9277 Port Side. Our room was clean, spacious, bathroom and shower perfect size. Lots of shelf space in bathroom. A little concerned about the closet space, but everything did fit ...
Read More

My wife and I decided to once again take a wonderful and relaxing vacation so I booked a cruise on Celebrity. Our other two cruises were on Princess and we loved them, but we wanted a longer cruise and we were willing to try Celebrity. One of the main reasons was that the Cruise was out of NJ, which is much closer to home and did not require a flight to Fla. II booked the cruise on the ...
Read More

Links to photos, daily schedules, and menus can be found at: http://www.sjajg.com/travel/cruise2012C/Silhouette_2012/Silhouette_February_2012.html This was our fifth cruise to the Caribbean from the north, having taken three on Celebrity from Baltimore and one on Princess from Brooklyn. I'm almost able to tell where we are on the route from the sequence of potholes in the ocean. So you ...
Read More

Embarkation; Decided to go early and beat the crowds. Big mistake. Seems everyone had the same idea and it was a madhouse. Felt a little sorry for my driver. Once we got to the drop-off area everything smoothed out and was handled very efficiently. Lunch; Last cruise was same ship, in the Med in October. Almost nobody in Bistro on 5. Very crowded this time. Lots of folks seem to be ...
Read More

Getting to Port Liberty is a bit of a challenge due to very poor signage as you wind through secondary roads in an industrial port area. The port facility itself is extraordinarily unsuited as a cruise terminal: traffic is chaotic, and the drop-off/pick-up area is simply not designed for efficient handling of close to 3,000 passengers debarking as the first of the embarking 3,000 start showing ...
Read More

Embarkation. The day before we left we got an email from Celebrity that the embarkation will be delayed by an hr. to sanitize the ship as a precautionary measure. We sailed in Celebrity twice before, this our 1st embarkation from Port Liberty. Our daughter dropped us at so called cruise terminal. What an eyesore of a terminal with tents and old dilapidated warehouses converted into passenger ...
Read More