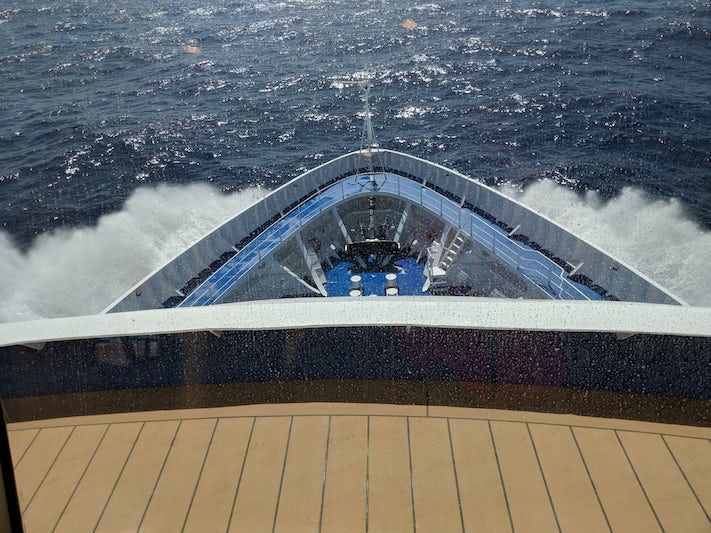 This ship should not have been sailing

DianneES
2-5 Cruises • Age 70s
We had been on a previous silversea cruise to alaska and when we and our friends decided to do another cruise, we chose the baltic because none of us had ever been to that area of europe. While we felt that the food and service in the restaurant was extremely good (kudos to jose our server) and our veranda cabin (#733) was kept relatively tidy by the appropriate staff, our friends found many ...
Read More

Even better than expected!

Stac2
6-10 Cruises • Age 60s
We liked the size of the SIlver Cloud and 3 nights in St.Petersburg. The overall itinerary was fabulous and we had beautiful weather. We were somewhat hesitant about the Cloud after reading so many reviews about how run down the ship is and this being its last cruise before becoming an expedition ship. We were so thrilled to find the ship in great shape. Perhaps the color scheme is a bit dated ...
Read More

hoover1011
10+ Cruises • Age 50s
Totally disappointed. We sailed last year on the Shadow to Alaska and had a great experience so decided that we would do this as a yearly get-a-way. This year we decided to go to Northern Europe, I talked a friend into going by telling her of the excellent service, food and attention. She travels alone therefore paid over $8k for her room. I have never been so embarrassed. The dinners served ...
Read More

Worst cruise we have ever taken.

Bunkey41
2-5 Cruises • Age 80s
Chose it because we had used Silversea before and were pleased. We were not told in advance that the ship would go into dry dock after this cruise. We were assured that the state room would be equal to our medallion suite on Silver Shadow. We were astounded to find the room no larger than a closet WITHOUT AIR CONDITIONING. WE BEGGED FOR 3 days to have the AC fixed as we slept 3 nights in shifts ...
Read More

lamedoc
2-5 Cruises • Age 70s
The Silver Cloud spent 3 full days in St. Petersburg and docked in the city. We were able to see a lot....even attended a performance of Swan Lake at the fabulous Mariinsky Ballet. Reason enough to book this cruise. We weren't interested in entertainment or activities, except for attending the excellent lectures on upcoming destinations every evening. The only glitch in the whole ...
Read More

jgm1
2-5 Cruises • Age 70s
We chose to cruise with Slversea because we liked the itinerary. Shortly after making the reservation and paying in full I saw an ad online for our exact cruise offering free roundtrip airfare to Europe and a two cabin upgrade. I contacted Silversea and was given a partial credit for the airfare but no cabin upgrade. I declined using Silversea to make our pre and post hotel and transfer ...
Read More

vtwatts
First Time Cruiser • Age 60s
We wanted to visit the Baltic states - Norway et al. and St. Petersburg. The Silver Cloud was super and the service and crew were great. Some of the tours were good, especially in St. Petersburg. But several were ridiculous - gardens tour without entry to the main palace for $175. A tour of a town in Delmark with all the shops closed - on a Sunday. Ultimately, a traveler must understand that the ...
Read More

SusanSimmons
2-5 Cruises • Age 70s
We walked around the old city of Stockholm after arriving from our overnight flight before going to the ship for departure. It would have been better if we had been able to have an extra day to see Stockholm without having to go to a separate hotel for the night. I wanted to visit as many Baltic countries as possible in good weather. The August weather was near perfect every single day. I ...
Read More

Oslo to Stockholm including Moscow and St Petersburg, Russia

SnickersSiri
6-10 Cruises • Age 70s
After sailing with SilverSea on the Silver Wind in 2011 we decided we prefer the smaller numbers of passengers over the larger ships and booked with them again. We wanted to see St Petersburg and Moscow and thought this cruise would allow us to do that. The Bullet Train between the two cities was also something new to experience. We had been to the Scandinavian countries 30 years ago and ...
Read More

Never take a cruise on a ship about to be updated.

polosheepdog
6-10 Cruises • Age 70s
Service was outstanding throughout the ship. Dock locations in every port were splendid. We love smaller ships and wanted to go to Saint Petersburg, Silver Seas had the only top rated small ship stopping there and we liked the three days it stayed. The other ports were all second rate, with the exception of Helsinki. Saint Petersburg cannot be over rated and the shore excursions were ...
Read More