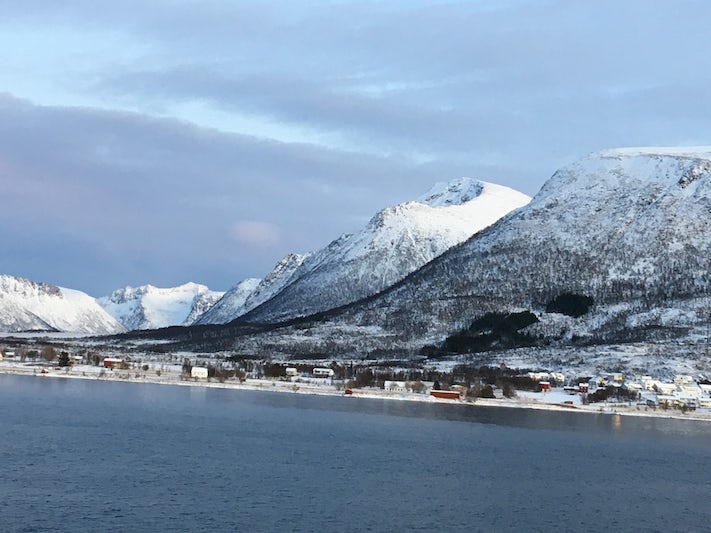 See all photos
Cruiser Rating
4.1
Very Good
64 reviews
Ratings by category
Featured Review
Northern Lights Spectacular
"We took this cruise because it offered the opportunity to see the Northern Lights which we did on several occasions. Without seeing the lights, my rating would have been lower. The ship through its announcement..."Read More

We took this cruise because it offered the opportunity to see the Northern Lights which we did on several occasions. Without seeing the lights, my rating would have been lower. The ship through its announcement system (press the information button on your room phone when you want to hear the announcements) lets you know when the lights appear regardless of the time. Our cruise left a day ...
Read More

Lovely trip in the winter to the far north of Norway

We chose this cruise to see the northern lights and to experience the winter darkness and both of these expectations were fully met. The views were wonderful, particularly when we sailed into the Trollfiord. The atmosphere was relaxed and food good, although we struggled with the buffet lunch and breakfast - not easy to find a table and food not hot. There was plenty of seating in the lounge ...
Read More

Before the cruise we stayed in a Scandic hotel near the terminal of Hurtigruten. The embarkation went very smoothly and relaxed, no stress at all. You will receive good information before going on board. The ship was in Art Deco style and looks lovely. We had a cabin with a window and enough space for 2 people, 2 beds which could we turned into a cough. Enough space for clothes and your personnel ...
Read More

A wonderful experience with excellent staff and services

The location of this cruise was the determining factor for me as I wanted specifically to visit Norway whilst not having to repack continually. We were a little concerned about the quality of the cruise, having read adverse reviews but it couldn't be further from the truth. The cruise was wonderful, the staff consistently gave excellent, friendly service. The food was superb, if heavy on the ...
Read More

I really liked the character of the ship, the art work and the layout. I enjoyed the hot tubs so much and the upper decks. The cabin was nice, the only downsides I could call out are. * The air from the ceiling was strong, it blew down on the bed quite a lot. * There wasn't any evening entertainment in the lounges, no piano playing or quiz or anything, it would have been nice to have a ...
Read More

I wanted to cruise the Norwegian coast and Hurtigruten provides a very safe experience. We were told if the weather is really bad, they ships wait it out until it's safe to proceed which is nice to hear after the Viking disaster. The cabins are small but adequate. I travelled with a friend but we chose to have separate cabins. 12 days together in one small cabin would have been ...
Read More

Excellent BUT this needs to be dealt with

I have just returned from the round trip on Finnmarken. Hurtigruten provides an excellent voyage and some stunning scenery. Much has been said about the trips so I will not add to the many reviews. BUT, Hurtigruten and probably other cruise lines MUST deal with the problem of mobile phone usage. WE witnessed people taking calls on speakerphone and coupled with their loud voices this was a massive ...
Read More

A "Must" if you want to see the Northern Lights!

This Cruise has been on our "Bucket List" for the past ten years. Earlier this month we eventually boarded the Hurtigruten, Finnmarken and was pleasantly surprised. Being under the impression that this is a "working" ship, we found the amenities being similar and equal to that of other "Commercial/Passenger Liners. Calling at most of the small towns on the Coast Line, makes this a ...
Read More

To see the Northern Lights was on our bucket list. We were not disappointed! On our third night, we received notification that the lights were visible. We threw on the warm clothing and rushed outside, only to be greeted by Nature's miracle. As we sailed up the coast of Norway, we were treated to this phenomenon every night! We were also treated to many marvelous fjords along Norway's ...
Read More

This was our first experience of a cruise proper (we had previously sailed to New York on the Queen Mary II). We went principally as a way, we hoped, of seeing the Northern Lights. We were most unfortunate in that the weather was not very good - rain and low cloud plus strong winds. However, we did see the Northern Lights on three occasions although they were a little weaker than ...
Read More