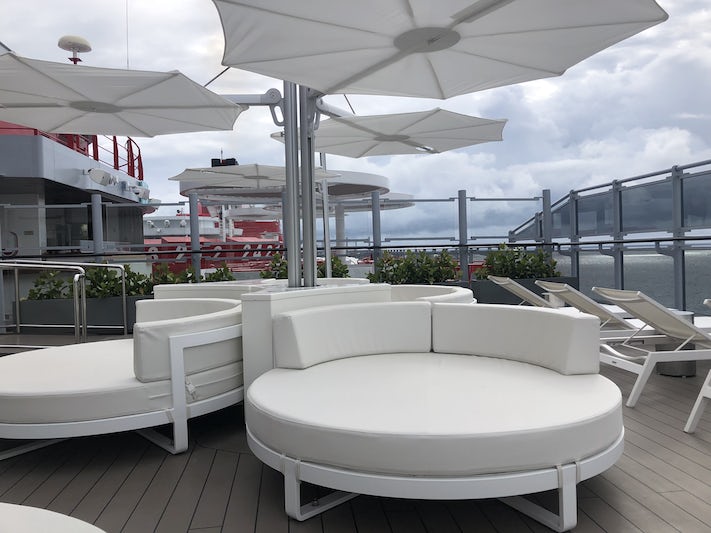 See all photos
Cruiser Rating
4.3
Very Good
159 reviews
Ratings by category
Featured Review
VA VA VOOM ON VIRGIN VOYAGES
"Despite a trying pre embarkation process ref covid testing a totally fabulous time was had. Although the problems at the testing site were apparently due to a third party company we feel Virgin stepped up, not only..."Read More

Robertcharles
10+ Cruises • Age 60s
Booked a Suite so expected the rockstar treatment. No VIP check in at Portsmouth and bit more like cattle class. Cabin was very well appointed but would have expected a bottle of champagne on arrival. Mini bar was either spirits or wine not both and you would have had to pay if you wanted both. For the money paid would have expected at least one free day to experience the spa. Overall not the ...
Read More

This is not the cruise I brought

Review for Scarlet Lady to Europe - All

andyroo104
10+ Cruises • Age 30s
So my previous review was really good, I had no real problems or issues until today. So I brought this cruise months ago, and I've been onboard for the last 3 cruise's. Today while doing my usual routine, cocktails in the hot tub do I find out that not only as some travel agent block booked the remaining cabins, taken over the top deck around the pool for some 'private' function and then ...
Read More

Virgin Voyages “They do things differently”

Cuckoo-Maritine
6-10 Cruises • Age 50s
Simply put virgin are putting some impressive and well designed ships into service but they might be holding themselves back with a standard statement of we do things differently. It’s great to break the old ways of cruising and the ships with inclusive all in dining is a good thing. However there are some issues with virgin being virgin: so don’t expect much sailing information or ...
Read More

A quieter and more refined version of Saga

Mr Miserable
10+ Cruises • Age 2020s
We expected different but I was surprised at what Virgin have done well but perhaps more surprised at what they did badly. First of all the App since your whole experience revolves around it functioning correctly. We were a party of 6 with a mix of IOS and Android phones and so can authoritively say the failings of the app are not down to the operating system of your phone. Everyone of us had ...
Read More

Review for Scarlet Lady to Europe - All

AnneFrank75
10+ Cruises • Age 70s
The two of us went on Virgin’s new Scarlet Lady cruise for 4 nights, at sea. Checking in was poor; we did not get a precise location to go to, given that we had to go to a covid test centre. It took two hours between arrival and boarding and then they lost one suitcase which Anne found eventually as the boat was due to sail. The balcony cabin was a reasonable size but poor design with ...
Read More

Kiwilady5
First Time Cruiser • Age 60s
As a first time cruise for me, it had many things going for it. It was a short cruise, no children, modern decor, no gratuities. The restaurant food and service was excellent. The cabin, Sea view, was spacious and the cleaning staff very attentive. Poor them though, having to scrape the Black Soap off the hand basin each day. Not quite sure who would be purchasing some of the items on ...
Read More

Lauren2504
First Time Cruiser • Age 20s
This cruise was an amazing first time experience. The ship is beautiful and there’s fun shows, good self-serve entertainment and a lot of food options. The staff are super friendly and it’s nice to feel like everyone *wants* to be working here! Everyone has a smile and is super welcoming. Zoltan was great, as was Mauricio! I’d say that Virgin needs to specify their target audience, ...
Read More

What a brilliant weekend

Alex Batho
First Time Cruiser • Age 40s
I went on this weekend cruise with my sister because we always try to go away for a couple of days together each year. We had an absolute blast. The food was better than we could possibly have hoped for. Everything we ate felt like top restaurant quality and came in a fun, relaxed atmosphere. Every member of staff we encountered was polite and seemed happy to be doing their job. We had dinner ...
Read More

Gingerspurs
2-5 Cruises • Age 50s
A little different to other cruises we have been on and started poorly when we were not pre advised that we would need to go in a coach to have a lateral flow covid test done which took approx 1 1/2 hours before we were then brought back to begin boarding the ship. Then when we boarded there was no really greeting we were just directed to a lift and told to go to our cabin, no itinerary, no ...
Read More

cooinda
10+ Cruises • Age 70s
Curiosity led us to book this cruise - this ship is certainly not directed at our age group, but as veteran cruisers since the mid-1970's (we started pretty young) we couldn't resist a peak at a cruise ship aimed specifically at non-cruisers. The ship looked huge, and rather ugly, but is in fact smaller than some of the super-cruisers and only takes 2750 guests - or 'Sailors' as the hype ...
Read More