You may also like
Dismiss
10 Travel Hacks That Will Make Getting to Your Cruise Ship a Breeze
Hidden in the Fine Print: 16 Things You Need to Know About Your Cruise Contract
Best Cruise Carry-On Luggage for Those Who Travel Light
TSA-Friendly Travel Gear for Your Next Cruise
Best Luggage for Cruise Travel
How to Navigate the Airport on Cruise Turnaround Day
10 Reasons to Stay in Seattle Before Your Alaska Cruise
Carnival Cruise FAQ
Why You Should Pack These 6 Things in Your Cruise Carry-On
Onboard Health and Safety Essentials to Pack for Your Next Cruise 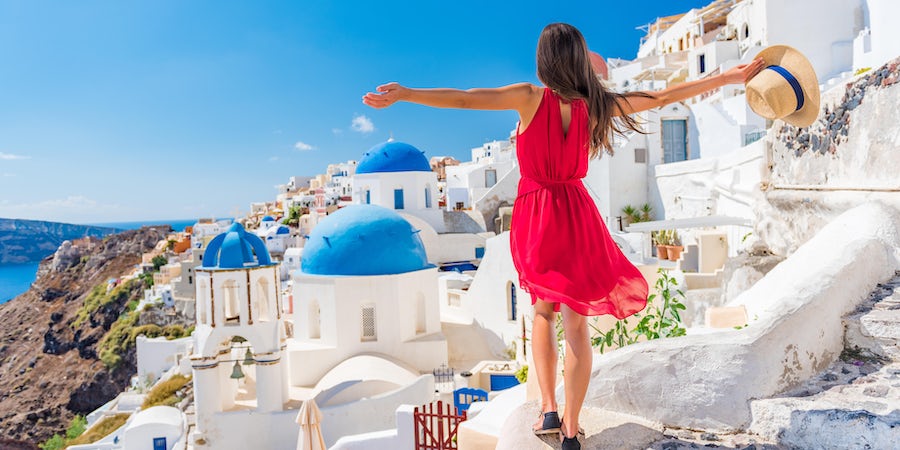 The old adage that "getting there is half the fun" no longer applies to travelling to and from cruise ports. Indeed, with air travel becoming more of a hassle and a lack of public transport to some cruise terminals, the journey is not nearly as satisfying as the destination -- onboard the ship.

But there certainly are ways to reduce stress when travelling to and from a cruise. Here, we offer tips and advice.

1. The time has come; get a passport.

Almost all cruises departing from Australia will require a passenger to have a passport that is valid for at least six months. For cruises operated by Australian-based ships that don't visit any foreign ports (such as Australian domestic cruises and cruises to nowhere) a passport is needed or a government issued photo identification -- the Queensland Adult Proof of Age Card is acceptable, but not the older version of the Queensland Card 18+. Passengers under 18 taking a domestic cruise can use a current Medicare card. However, these rules are unlikely to apply to a foreign ship operating Australian coastal cruises, such as say Holland America Line or Crystal Cruises, which often sell various legs of Australian circumnavigation cruises. Passengers should check with the cruise line well in advance as gaining a passport (especially in the busy holiday season in Australia) can take up to a month. In the early years of passenger air travel, prudent sea-goers generally opted either to take the train or to travel a day in advance of sailing due to the tenuous dependability of flight schedules. Anyone who has travelled by air recently may feel they have been thrown back into aviation's dark ages, given the frequency of significant delays.

Whether you blame it on increased security concerns, deteriorating weather, crumbling air traffic infrastructure or understaffing of the air traffic control system, the causes matter not. The results do. Currently, on-time performance figures hover around 75 percent. In other words, for every two cruises you take the odds are that one of your flights will be delayed. Given those figures, the prudent traveller allows plenty of time to make connections between flights (I insist on at least two hours) and to get to the ship from the airport. If you can't get a flight that arrives more than four or five hours before your ship departs, opt to fly in the day before.

3. Invest in the largest permissible carry-on.

Roll-aboards are the most hassle-free. The reason why we recommend the "largest permissible" is that if you happen to be on a flight that insists on limiting the number of personal items you carry onboard; you can always stuff that camera case or handbag into your largest carry-on bag. Since many airlines now charge fees for checked luggage, many people are increasing the size and number of carry-on bags. As a consequent, airlines have pledged to strictly enforce the rules both as to the number of bags allowed in the passenger cabin and the maximum size of those bags. The prudent traveller checks with his or her airline to determine the current rules rather than risk having a bag rejected at the gate and gate checked -- at the going per-piece rate for checked luggage.

Similarly, since many airlines now charge for every piece of checked luggage -- and generally more for each piece subsequent to the first one checked -- a large enough suitcase or duffel to keep your checked bag tally to an absolute minimum is highly prudent. The same caveat for carry-on applies here as well; be proactive in checking on maximum weights and dimensions (length x width x girth) for each piece to avoid penalties for oversized baggage. If your checked bags are locked, you need to wait for them to be either searched or scanned before you can leave the check-in area. If TSA (Transport Security Administration) can't get into your bags to inspect them they will cut off the locks. There are many styles of TSA-compliant locks available at most luggage stores. These can either be opened by key or combination by the owner or by a special master key carried by TSA personnel. Another solution is plastic cable ties, available at hardware and electronics stores. If your bags are sealed with cable ties you can proceed as soon as they are left with TSA personnel.

Additional tip: Buy unusually coloured cable ties to discourage unauthorised opening of your bags. Potential thieves may have a supply of normal white ones, but they are unlikely to have Day-Glo orange cable ties.

5. Whenever possible, check in online or at the airport check-in kiosk.

It saves time to check-in for your flight at home on your computer or mobile device. When you get to the airport, simply proceed to the baggage drop. Many airports have check-in kiosks (computer terminals) where you can check-in and have your boarding pass printed there and then. Even if you've never bought travel insurance before, now is the time not to be without it. In addition to the threats to smooth flying set out in Rule #2, above, you can add the spectres of airline bankruptcies and travel agency shutdowns. Shop around for insurance and opt for a policy that compensates you in the case of carrier, and/or cruise line, insolvency. (As an adjunct, buy travel insurance now, even if your trip is months down the track, to get the maximum coverage for bankruptcies in addition to weather concerns and pre-existing medical conditions.)

7. Now's a good time to cash in those frequent flyer miles.

The past couple of years have seen a bumper crop of airline failures and mergers. There's no consistent yardstick on how well all those miles you've earned will be protected. So it's prudent to get some benefits from the programs now rather than later. Even if you can't get free seats to your desired destination, you can still use the mileage for other benefits such as airline lounge memberships, deals on partner travel or merchandise offers, or possibly upgrading an economy seat ticket to business or first class. 8. Approach travel like an accountant, not a tour guide.

If you are the family member who takes charge of travel planning, your mission in the past may have been to find the best way to get to your homeport for the lowest cost -- end of story. Nowadays the cost factors are far more complex. Previously, cruise travellers living just far enough from a port found the cost of petrol, food and accommodation on a pre-cruise road trip to far exceed roundtrip air tickets. Now the new economics of travel may have turned those ratios upside down. Don't merely assume the old rules of thumb still hold; sharpen your pencil and do a side-by-side comparison of projected costs among all possible ways of transporting your family to the port.