You may also like
Dismiss
Q&A: Kate McCue, the Cruise Industry's First American Female Captain
What Is a Cruise Ship Bridge?
14 Instagram-Worthy Food Dishes on a Cruise
10 Things Single Parents Should Know When Cruising With Their Kids
On the Danube River: Two Longtime Pals Make Discoveries About Europe and Friendship
50 Years of First Royal Caribbean Cruises
Cruise Activities You Can Re-create at Home: Virtual Cruising and Meetups
Cruise Critic Members Shout Out a Few of Their Favorite Crew
Weaving 'Herstory': Q&A With the History-Making International Women's Day Cruise's Female Officers on Celebrity Edge 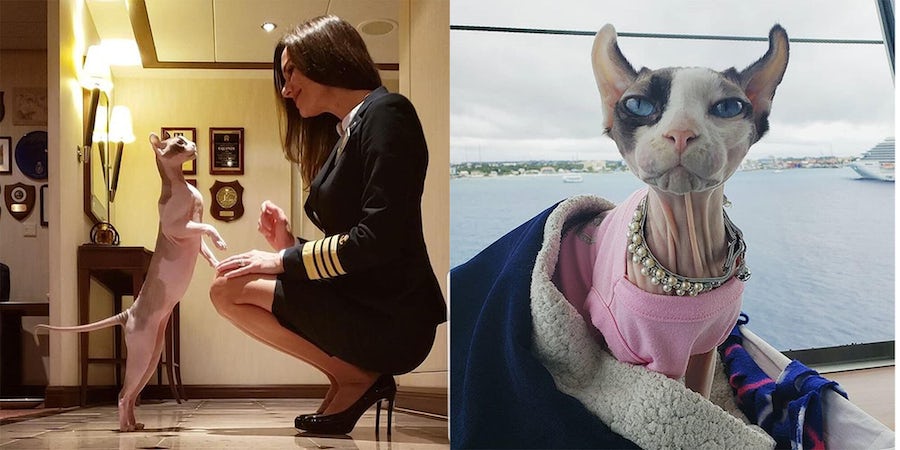 On a Caribbean sailing onboard Celebrity Cruises' Celebrity Edge, we sat down with Bug Naked, a hairless sphinx cat who spends her days on the bridges of cruise ships, sailing the seven seas with Captain Kate McCue. Join us as Bug dishes on everything from her skincare routine to her favorite port.

All answers have been translated by Captain Kate McCue.

Do you ever get seasick?

Yes. This is something I learned from the very first time I came on a ship. We left Bayonne, NJ, and sailed out into the remnants of Hurricane Hermine. I went into fetal position, and my mom was worried that I would have to be taken down to medical and get a shot of Dramamine in my butt. But, I've gotten much better over the last three years.

What is your go-to spot for onboard naps?

Related: 10 Ways to Relax on a Port-Intensive Cruise

Wherever I can find sunshine, whether it's the bridge windows or the infinite balcony in our cabin. Lately I've even been tucking myself into my stroller.

Related: Do's and Don'ts for Cruising With a Baby

If you could have the ship's chefs prepare you one meal every day, what would it be?

It would be pate of chicken with a side of chicken snacks and a nice chicken broth for sipping. My favorite snacks are popcorn, olive oil and bacon -- anything salty.

Does the bridge come equipped with a litterbox?

Do you have a favorite port for wildlife-watching?

I love the anchorage ports ports where the ship must drop anchor and cruisers take smaller boats into port because the bridge team is out on the bridge wing all day, so they're closer by, and I like to hang out with them. They actually call me the maneuvering support animal because whenever they do maneuvers -- especially when it's somebody's very first time -- I stand right next to the person and take all the stress away.

Do you have a secret skincare regimen you can share with us? Do you need to wear sunscreen?

I take a bath (or shower) every-other day and just stay clean. If I go out into the sun, I put on some clothes so I have protection, or I sit in my stroller with a little bit of a cover.

Related: 12 Most Essential Travel Baby Supplies You Need on a Cruise

What's the most interesting thing people don't know about you?

Related: 10 Ways to Fit in on Your First Luxury Cruise

Note: Although Bug appears hairless, she does have very short, spikey fur that makes her feel like velvet to the touch.

How do you spend your free time? Any hobbies?

Related: What Is a Cruise Ship Bridge?

To check out Bug's adventures at sea, follower her on Instagram: