You may also like
Dismiss
Internet at Sea: 7 Things You Need to Know
What to Expect on a Cruise: Internet Onboard
What to Expect on a Cruise: Using a Mobile Phone
Quick Tips for Using Your Phone on a Cruise Ship
Voom Internet on Royal Caribbean's Harmony of the Seas
Norwegian Cruise Line Internet Packages and Prices
6 Cruise Lines With Great Wi-Fi
Cunard Internet Packages and Prices
Royal Caribbean Cruise FAQ
How to Keep Your Data Safe When Cruising 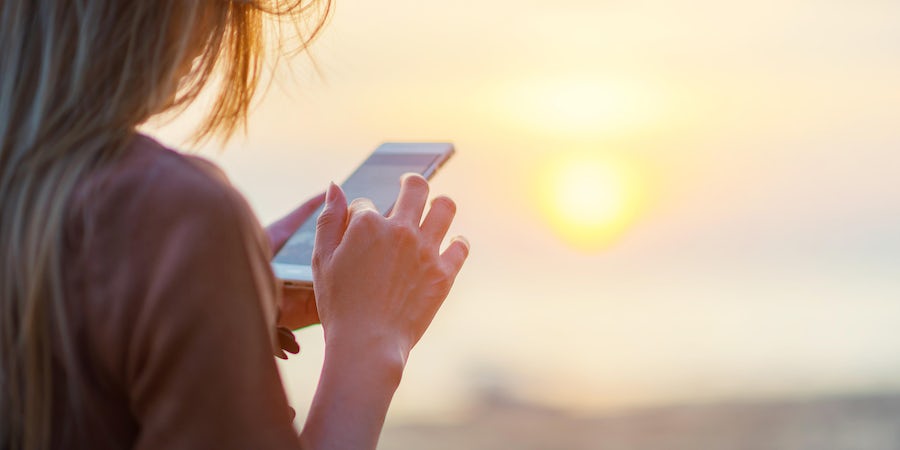 Connecting at Sea: Internet and Phone Use Onboard Your Cruise (Photo: tolotola/Shutterstock)

Connecting at Sea: Internet and Phone Use Onboard Your Cruise (Photo: tolotola/Shutterstock)
Tiana Templeman
Contributor

Staying in touch with fellow passengers at sea, and friends and family on land is easier than ever. Many ships now have branded apps that allow cruisers to chat with each other onboard. Several lines have rolled out superfast high-bandwidth Wi-Fi, with relatively affordable high-speed services that can even support video chats, music and movie streaming.

However, internet speeds can vary significantly by line and ship, depending on location, available bandwidth and other factors. And, the majority of cruise lines still don't offer speeds that can support streaming/video chat services, such as Netflix or Skype.

Internet charges also vary by cruise line. You can be charged by the minute or by bandwidth, pay for daily or voyage-long packages, or choose from tiered usage packages with prices based on the types of sites and online services (sending emails, streaming shows) passengers use.

Cellular services are generally supported by your home carrier; rates at sea vary by wireless company but typically reflect international roaming rates, which can be breathtakingly pricy. When the ship reaches port, pricing will switch to the country-specific roaming rate -- also not cheap unless you've signed up for an international calling plan.

If your home plan and phone allow calls over Wi-Fi, and you anticipate making or receiving multiple calls during your cruise, you may find the ship's internet packages a more affordable option than international cell charges. Just make sure your phone is in airplane mode with the Wi-Fi turned on to avoid having the phone automatically switch to cell service.

Below is a rundown of what the major cruise lines offer for internet and cellular service. These days, staying in touch with friends and family stuck on land -- and even fellow passengers at sea -- is easier than ever. Ships now have branded apps that allow cruisers to chat with each other onboard, super-fast high-bandwidth Wi-Fi and even tablets for use at sea. Whether you want to post selfies to Facebook or check out your ship's dinner menus on your iPhone, you'll likely be covered.

Internet speeds can vary significantly from line to line and ship to ship, depending on factors such as location and available bandwidth. Most cruise lines don't offer speeds that can support streaming services like Netflix or Spotify. Royal Caribbean, however, is changing the at-sea connectivity game with a relatively affordable high-speed service that can support video and music streaming.

Just like connection speeds at sea, internet charges vary by cruise line. Some lines charge by the minute, and others offer daily or voyage-long packages. A few lines charge by bandwidth. Plus, a lot of major cruise lines are beginning to offer tiered usage packages that are priced based on the types of sites and online services passengers use. For example, Royal Caribbean has one package for those who just want to browse the web or send emails and another more expensive package for passengers intending to stream shows and movies. Carnival Corp., too, is improving the internet on all 10 of its lines and has introduced tiered usage packages. River cruise lines typically offer free internet.

Mobile phone rates at sea vary by wireless company, but they will generally reflect international roaming rates, which can be breathtakingly pricey. When the ship reaches port, pricing will switch to the country-specific roaming rate -- also not cheap unless you've signed up for an international calling plan.

Below is a rundown of what the major cruise lines offer for internet and phone service.

For some background and tips, here's everything you need to know about internet at sea.

Internet and Wi-Fi: Although there are no onboard internet cafes, internet is available 24 hours on all Carnival ships. There are several price plans available, allowing choices depending on needs and usage. The premium plan covers everything from email to Skype, and offers the fastest possible connection. Additionally, unlimited internet is available through Celebrity's "Go Big, Better, Best" (GBBB) fare bundles. When booking GBBB-eligible sailings, passengers get to choose one of four perks, including unlimited internet at no cost. (Additional perks can be added at extra cost.) This pricing is not offered for inside cabins, nor is it available for transatlantic, transpacific and Celebrity's Galapagos sailings.

Mobile Phones: Passengers on all Celebrity ships can use their mobile phones onboard. Roaming charges will apply.

Internet and Wi-Fi: Cruise & Maritime Voyages Australia-based ships both offer Wi-Fi internet access in all suites and most public areas. Astor has internet equipped computers for passenger use; Vasco da Gama is Wi-Fi only.

Cell Phones: Cruise & Maritime Voyages offers a mobile phone network that allows passengers to send and receive calls on their own compatible mobile phones while the ship is at sea. Your provider's roaming charges will apply.

Internet and Wi-Fi: All Holland America ships have internet cafes. The line's Explorations Cafe, powered by the New York Times, is a cozy, coffee house-style area where passengers can either use the computers provided or a wireless internet device. High-speed terminals are scattered around the library and handily adjacent to a coffee bar. Satellite-powered wireless access is available fleetwide in most public areas and all cabins.

Mobile Phones: All ships in the Holland America fleet are mobile phone friendly, and thanks to an agreement with Wireless Maritime Service, passengers can make and receive calls, send and receive text messages, and access emails and surf the web with their phones. Phones must be activated for international calling with the passenger's home provider, but no special codes or software are needed. Roaming fees apply.

Fees: There is a per-day social media package available for $14.99 which allows access to popular social media sites. A general per-day internet usage rate of $29.99 is availble for sailings up to 12 days long. Premium unlimited costs $34.99 per day and includes streaming. All plans cost slightly less for longer sailings and if purchased online before the cruise. All ships except for Sky and Breakaway offer 250-minute blocks of usage time for $125. Laptop rental is complimentary with any time-plan purchase, but it's subject to availability.

Mobile Phones:  Passengers can make and receive calls and use data on mobile devices while the ship is at sea via a satellite connection. Roaming charges apply. The iConcierge phone app allows ship-to-shore and shore-to-ship calling capabilities using VoIP (Voice over IP technology). A per-minute fee applies for this service.

Internet and Wi-Fi: P&O Cruises has a 24-hour internet cafe and shipwide wireless internet. The line offers a choice of packages, including social media only packages, starting at $12 per day.

Mobile Phones and tablets: Passengers can make and receive calls, send and receive text messages, read emails and surf the Web on their own phones and mobile devices while the ship is at sea, via a satellite. Roaming charges apply. Internet and Wi-Fi: There is a 24-hour internet cafe onboard and shipwide wireless internet available onboard Princess Cruises. Fees are by the minute, and vary according to packages purchased. Mobile phones and tablets may be used while at sea.

Fees: Princess Cruises offers three different packages in Australia. Social costs $14.99 per day and allows access to the most popular social websites and applications such as Facebook, Twitter, Instagram, etc. Also includes WeChat and WhatsApp. The Social Package should be purchased for printing airline boarding passes. Surf costs $24.99 per day and includes the Social Package plus generic browsing sites, email, news, finance, sports and more. Premium costs $29.99 per day and includes Surf Package plus video streaming including YouTube and Skype.

Mobile Phones and tablets: Passengers can make and receive calls, send and receive text messages, read emails and surf the web on their own phones and mobile devices while the ship is at sea via a satellite connection. Roaming charges apply.

Internet and Wi-Fi: VOOM is the name of the Royal Caribbean internet service that is available on all ships. Royal Caribbean’s VOOM packages can be confirmed pre-cruise, through the Pre-Cruise Planner tool or while onboard.

Apps: Ovation of the Seas is the only Australia-based ship with the complimentary app, Royal iQ, which allows guests to view the daily Cruise Compass planner, book shore excursions, make dining reservations, schedule entertainment, reserve onboard activities, view onboard accounts, call and text others onboard (nominal fee) and make and receive calls to those on land (nominal fee).